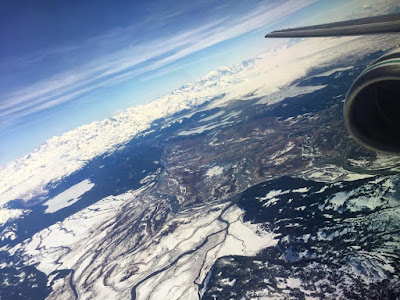 Cold, glacial air sweeps down off the mountains and lands on my tongue; but the essence of ice and adventure dissipates quickly.

And I have wanted this for a while.

When the recruiters called my name into that small room almost one year ago, I couldn't wait to start my new adventure in the forty-ninth state.

But life is funny, and the airline industry is ever changing.


When I assumed that I would be based in Anchorage, I got Seattle. When I was told I'd be doing Arctic turns and trips to Red Dog and seasonal flights to King Salmon and milk runs on the combi, I thought, cool, bring it on.

But this adventure has been a little different than I would have ever imagined.

My first layover was Orlando, Florida. Next was New Orleans, Louisiana, and then I had a stretch of Dallas, San Diego and San Francisco. My most common layovers have been Phoenix and Maui, and I just got back from Puerto Vallarta.

So much for the forty-ninth state.


I also joined this new airline right at its turning point. We bought another airline. We're in the process of merging. Our East Coast presence is more prolific than ever and we've got the West Coast on lock.

I'm not complaining; it's been a wild ride. New aircraft being delivered every week, shiny new planes, new routes, new cities to explore.

I'm having an adventure all right.

This past week I looked at my schedule. San Francisco and Los Angeles with a few stops in between. It was going to be four days of quick flights, business travelers and laptops, questions about wifi and, of course, in-flight texting. I smiled. I love that my new airline is so up-to-date with the latest tech stuff but I miss, in a way, the old fashioned planes. No plug ins. No wifi. Just friendly folks who ask me if I have any old newspapers to read.


As I walk towards my gate, my phone rings. It's Crew Scheduling.

"Hey, sorry to do this, but we're taking you off of your SFO and LAX trip for tomorrow. We had a last minute call out and we need you on 'sixty-seven.'"

My heart jumps. The Milk Run.

Up in the state of Alaska, the infamous through flights are often called by their route number. The '55' is your Arctic flying, up to Prudhoe Bay, Barrow and Fairbanks before looping around to return to Anchorage. '65' is your Seattle to Anchorage local bus, with stops along the way in Wrangell, Petersburg and Juneau. And '67' is your "mini milk run" from Seattle to Southeast Alaska, with breathtaking views and a return to my airline's roots.

I check in with the gate agent and board my little plane. The 737-400 is an older gal, well-loved and complete with the famous tapestries on the bulkhead walls. If these fuselages could talk, I think, I wonder about the stories they would tell.


Our little crew of five - three flight attendants and two pilots - breezes through briefings and safety checks and soon the passengers begin boarding. Fishing poles begin to fill up the closet and overhead bins and I smile as I see the excitement on my passengers' faces: whether it's your first time up north or your thirtieth season, the thought of those magnificent glaciers and clear, icy bays never gets old.

Up, up and away. Over Puget Sound, up across the border to British Columbia, a hint of chop over Vancouver Island, but we keep soaring, hugging the rugged coastlines to the East and endless ocean views to the West.

We begin our descent over the wild Alexander Archipelago. Ketchikan is the first stop on our route, and the pilots carefully set us down on the short runway on Gravina Island. A few fishing poles and people deplane, and a few more board up again.

This is the local, not the express. Next stop: Sitka.


It's a short flight but with only twenty-three people onboard, there's time to chat. Old neighbors now find themselves seatmates. A fisherman in coach laughs as he sees his buddy sitting in First Class. They haven't seen each other since last season. There's talk of buying each other a drink. I serve a woman and her one-year-old boy some apple juice while I check in with the doctor sitting across the aisle from her. We all strike up a conversation. Turns out this was the doctor who delivered this woman's baby a year ago, and they're all happy for a reunion at 36,000 feet.

It's a small world up here.

In Sitka, a few more folks grab fishing gear and wave goodbye. They're headed for excursions, cruises and a few will even board float planes to even more remote locations. There's hardly time for me to take it all in, though, because we're boarding up and moving on.

In Juneau we do a crew swap, and Flight 67 continues on to Anchorage. Our crew of five heads downtown to check in for a short layover. It's drizzling and grey, and I love it. The rest of the crew heads off to bed, but I throw on a rain jacket and walk the streets.


There's time enough for a cold, frosty Alaskan Amber at the Viking, and afterwards I find myself sitting with a steaming pile of Russian dumplings down on the pier. Mt. Roberts stands tall through the fog as Mt. Juneau stands by her side.

The next morning it's time to jump back on the Milk Run. We hop back on a deadhead flight to Anchorage and swap planes to begin flight 66. Today, we're taking the road less traveled. Cordova is up first, and with a nickname like "Mudhole" airport you can guess what kind of place we're talking about. There's nothing much around when we open the door for guests to deplane, but they take their fishing poles and happily head off for adventure and breathtaking views.


We load up once again and head down south to Yakutat, which serves a region of some six hundred residents. There's no cell service here, no real amenities of any kind and no road connecting this place to the outside world. Our guests deplane and wander over to fishing and tourism guides who load them into vans bound for float planes and lodges where folks will experience this state like never before.

But I'm not staying here. It's time to board our trusty little 737 once again and head on down the southeast coastline back to Juneau once again, and then onto Seattle.

Before I know it I'm completing announcements for the ninth landing in the span of two days, and we're back on the ground in busy SeaTac airport.


Deplaning flashes by in a flurry of thank yous and smiles and kind words. Folks have had more than a good trip. They're have the time of their lives, they've seen mountains and Bald Eagles and the forty-ninth state in all of her glory.

Some may never get to step foot up north ever again; some may be going back next season.

But me, I'll be there next week. I'll make sure of it.