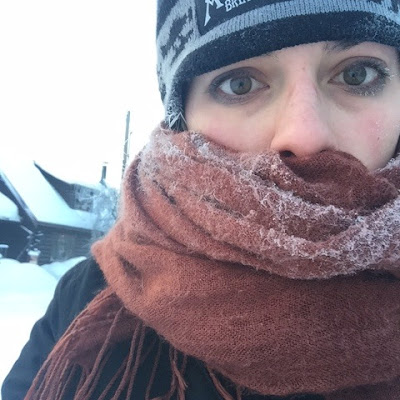 The air hit me in the face like an unexpected wall of water. I inhaled involuntarily and felt microscopic droplets of moisture turn to ice crystals in my lungs, making me sputter and cough. My eyes were watering before I could tell them not to and before I could even catch my frozen breath, tiny icicles formed on my eyelashes, creating a strange sense of sparkling lights just beyond my visual periphery.

It was negative twenty-two degrees Fahrenheit and dropping as the morning progressed to afternoon, although without a clear definition between day and night it's hard to determine the time in Fairbanks, Alaska.

When I finally recovered from the shock of the cold, I had a decision to make: walk a mile in the sub-zero conditions to a small community center or return to my warm hotel room.

The decision was a no-brainer: Keep walking. March on.

Every block was agony. When I couldn't trudge through the snow any longer, I walked in the street. When the street was too icy, I walked up on top of the snowbanks, hoping to not fall in. As I walked, I thought of all the women before me who had marched longer roads than this, endured so much more and whom I had never gotten to thank.

I had arrived at the Women's March in Fairbanks, Alaska.

Just over thirty-six hours ago I was leaving Maui where it was a perfect eighty-three degrees and sunny. I watched the sun rise as I sipped fresh squeezed juice, I read a book on the beach and I jumped into the ocean where I processed quite a bit: ocean water and salt tears are a cathartic mix.

Three weeks ago I was in Washington, D.C., where I grinned wildly as I skipped around the National Mall, happily enjoying the free-for-all museums and public spaces that felt so inclusive and democratic. I stopped by the White House to quietly say goodbye to the family that had occupied 1600 Pennsylvania Avenue for the past eight years and reflected on all the wonderful progress that had occurred in my adult life under the president I had helped vote in.

Somewhere between Washington, D.C., Maui and Fairbanks, something changed.

(Or maybe it was long before that.)

Human rights are being taken away. Equality has not yet been achieved. People are mad, sad, scared to death and if you don't feel these things, try to put yourself in the shoes of someone who may not have the same privileges as you do.

I rarely talk about my personal beliefs on this blog, but today I am talking about human rights.

As a flight attendant, we are committed to showing compassion to our customers and co-workers because you never know why people are flying, what they are facing or what they are leaving behind.

Be kind, for everyone you meet is fighting a hard battle.  -John Watson


Take this lesson and apply it to your neighbors and fellow humans.


Take this lesson and apply it to the decisions you make, whether that means signing up to regularly donate to Planned Parenthood or making a pledge to volunteer one Saturday a month or calling up your representatives to demand that heath care remain affordable and accessible for all.

Look beyond the surface. Look beyond your biases. Look into a stranger's eyes and tell me that they don't deserve all of the love in the world.


Keep marching for today, tomorrow and beyond.