There's a term among regional airline crews. It's a term that goes beyond teamwork, beyond co-worker bonding. It's a phrase that implies much more than just unity among a small crew during a four-day trip; it's about family... the Four-Day Family.

I know I don't normally talk that much about day-to-day operations at my small regional airline, but this last trip was different. It was the last trip ever for Carrie, one of my favorite Captains. After working for our regional airline for almost ten years, Carrie was now moving on up to Mainline and I wanted one last chance for a trip with her and an awesome crew. 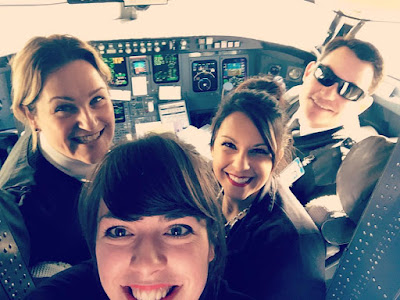 4:30AM. I wake up early and get ready before the sun is up. I have a two hour drive, more if traffic is bad. I am excited to see Carrie and Justin, the First Officer. The two of them are close friends and have been bidding to work together for their entire time in Seattle. In honor of Carrie going to Mainline, I put on my matte red lipstick and head off to the airport.

8:10AM. The crew is onboard our Canadair Regional Jet 900 and we have started boarding for our Friday morning flight to Las Vegas. In between helping folks with bags and seat assignments, we notice that two of the passengers appear ... tanked. Like, really, badly intoxicated. We let the passengers know that it's illegal to bring their own alcohol onboard and that it's against FAA law to even appear intoxicated.  They are slurring and trying to hide the gallon-sized bag of mini bottles that they have smuggled onboard. I walk up to the flight deck and tell Carrie. She shakes her head and makes an umpire-like motion with her hand. They're outtttt!

6:40PM. After the early morning passenger removal, a round trip to Vegas and a lot of running around, we are tired. Thank god our last flight of the day is a deadhead and thank god we get to sit together on the short forty minute flight up to Vancouver, B.C. Our crew of four sits in the back of the plane, snapping selfies and giggling like a bunch of Middle School kids. 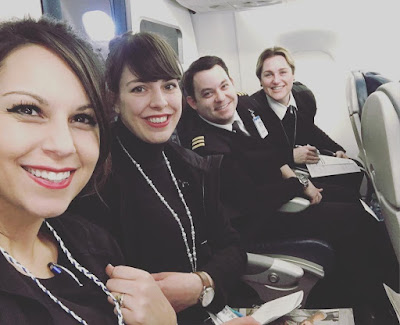 5:00AM. Another early morning wake up call but it's all good. We get to the airport, get through customs and security. I grab Tim Horton's donuts and coffees for the crew and we board our flight to Salt Lake City.

10:30AM. At the airport, we switch planes and Carrie does a surprise coffee run (it was an early morning and sometimes we need multiple coffees, okay?). We already all know each others' favorite coffees and milk preferences, and we are already giggling over a million inside jokes. More selfies and we board our plane again, this time for sunny Long Beach, California.

7:45PM. After a quick five-minute outfit change in our hotel rooms in Long Beach, we are back together for an afternoon out on the town. We explore downtown Seal Beach, eat a leisurely lunch and stroll on down to the beach to relax. Late afternoon drinks at a beachside bar, and then we head back to the hotel for ice cream and board games together in our room. We end up playing charades and laughing harder than grown adults should. 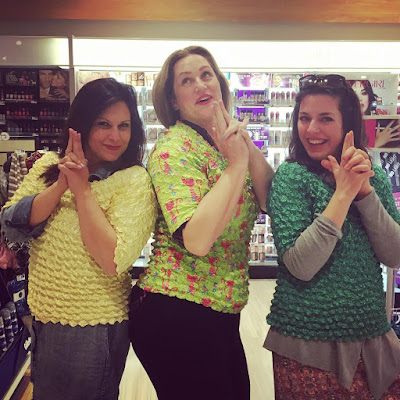 6AM. We are pretty tired by day three, and it's our longest day so far. I get downstairs and Carrie insists that I grab breakfast before hopping in the shuttle van. I smile; it's nice when the crew takes care of each other.

1:25PM. We've had a grueling four legs and three aircraft swaps. I am getting grumpy and by the time we get to Spokane. I just want to take a nap. But Carrie announces a surprise: she is inviting the whole crew to her house for a homemade Easter dinner. Her husband is already at the airport when we arrive, ready to pick us up. We arrive at Carrie's and are greeted with homebrew and Easter baskets from our Captain. Maybe it's presumptive, but I have a feeling this doesn't happen at Mainline. 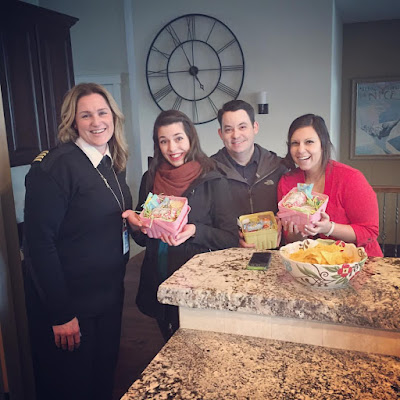 5AM. Another early morning. I am already sad that this is Carrie's last day. We board a flight to Seattle before getting ready for one last Las Vegas turn.

11AM. Coming back from Vegas, we have a few of the same passengers that were on our Friday flight to Vegas. I let them in on a secret: we're going to be pulling out all the stops of Carrie's Final Flight.

1:20PM. We've made a few announcements and the passengers are all ready: After landing and taxiing to the gate, Carrie comes out of the flight deck to thank passengers on their way out. What she doesn't expect is the plane erupting into cheers and applause. As passengers leave the plane they shake Carrie's hand, offer their congrats and even give out a few fist bumps. We have our youngest passenger, a little girl, come up and "pin" on Carrie's new wings. There are tears, hugs and a few more selfies before we leave the plane and head towards our cars. 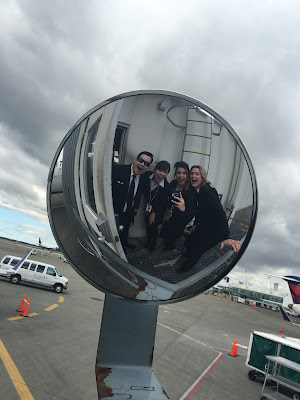 And just like that, the trip is over. I go home, still cracking up over our trip and looking through about fifty "crewfies" that we took.

And although I won't get to fly with Carrie again, we'll keep talking about the trip. Justin, Britney and I will laugh about how much ham we all ate on Easter or all the times we went shopping on our layovers and Justin had to be dragged into the shops with us. And I'll see Carrie again sometime, when I'm jumpseating on a big Mainline jet or even just laying over in her hometown of Spokane.