Putting On The Uniform.

Life on the ground was easy. And good. And needed.

I was craving those moments with friends and family, suddenly feeling like I was missing out on something. I took time off, went down to minimum hours. I used pretty much all of my vacation time. I flew back and forth to the Midwest, not for work, but to see a new baby in the family, to celebrate a wedding (or two), and to jump in the freezing cold waters of Lake Michigan.

Maybe all of this was pointing towards my longing to put down roots. Perhaps I had been soaring for too long.

At the end of yet another week filled with family and friends, I was feeling hesitant about my return to work. I wanted more time on the ground.

But you don't get a job as a flight attendant just to watch the planes take off every day.

So I returned to work. I got up early, packed my bag and put on my uniform.

And then something surprising happened.

That uniform changed how I felt. It had been hanging in my closet for several weeks above my shiny black pumps gathering dust in the dim light. I brushed off the navy blue polyester skirt and slipped into the heels feeling taller and already closer to the skies.

Walking through the airport, I realized that I was already exchanging smiles with passengers. It's like putting on a cape, this uniform.

This uniform makes you feel like you can fly.

I boarded the plane, ready for the beginning of my four-day trip. This was my usual trip. My route. The one no one else bids for. Seattle to Los Angeles. Los Angeles to Seattle. Seattle to Edmonton. And then thirty hours in Canada before heading back to Seattle and California.

SEA-ONT: Full flights, turbulence and lots of babies. But I was loving the chaos, juggling four coffees in my hands, cream and sugars falling out of my pockets and passengers joking about me needing to grow a third arm. I had soda down my front and my lipstick was long worn off, but I didn't care. This is what I live for.

ONT-SEA: Near the end of my second leg I sat in my jumpseat, chatting with two sets of couples at the back of the plane. Both were visiting Seattle and wanted advice on what to see. I told them stories of the islands, what ferries to take and the best little coffee shops to visit. By the time we landed, I had received two hugs and a high five from my new friends.

SEA-YEG: It was already ten at night by the time we took off after a slight delay. We dimmed the lights and whisked through a quick double service, not the easy feat on a flight just over one hour. When we landed, I noticed a young mother with two children. Her infant was wrapped up in her arms, and her little boy was asleep in the seat, pale, with a hospital band tagged around his tiny wrist.

"Do you think that someone would be able to help me carry my bags?" she asked hesitantly.

We quickly found an agent to bring up her stroller, and we held the plump, pink baby while she transferred her paper-thin son to the stroller.

"We had a long day at Children's Hosptial in Seattle, and then he had a major seizure before we got on the plane in Seattle, so I had to medicate him. He was so sad; he really wanted to be awake for take-off," she explained.

I quietly slipped her some coloring books and airplane wings so that he would have a few goodies when he woke up. The young mother beamed, radiating a positivity that I couldn't fathom was possible.

"Thank you so much! We'll be doing this route pretty often once his treatments begin, so I hope we'll see you next time!"

And that was the saddest 'I'll see you next time' I've ever heard.

I got to my hotel room after my long day and kicked off my heels. I hung up my cardigan and put away my navy blue polyester skirt.

And I took off my cape for the day. 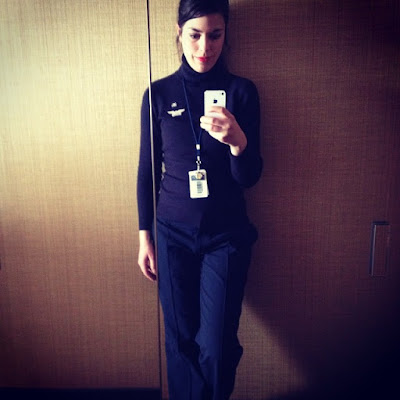