This week has taken me all over the country, through redeye flights and long layovers, rental cars and standby tickets. I've stayed up too late with old friends in a karaoke bar in Nashville, eaten barbecue in Austin and gotten lost in San Francisco's Chinatown. I've run into old acquaintances in Minneapolis and gone on a road trip with strangers across Washington State. I've had some possibly life-changing conversations and laughed, cried and wondered what day, timezone or city I am in.

A lot can happen in a week when you're a flight attendant.

Sunday night, one week ago I was in San Francisco, getting ready to board a redeye to Austin-Bergstrom International Airport. Austin was amazing, and after my whirlwind tour of brisket, fried chicken and sweet tea, I loaded up and worked the flight back to San Fran. Don't worry, Austin, I'll be back.

I jumped on an Alaska Airlines flight from SFO back to Seattle, grabbing a quick nap along the way. If this week has taught me anything, its that I can sleep anywhere and anytime there is an opportunity.

Back in Seattle I met up with my wonderful boyfriend and we drove home to Whidbey Island. No matter how crazy and exciting my travel life may be, there is nothing better than being with Tim and my cat Bruce, baking homemade cookies and sitting out on the patio in my bare feet with a mason jar full of iced tea. My boys always hold down the fort for me while I am gone, and I love coming home to them.

My blissful homecoming was short-lived. Thursday morning I was back on the road. A ferry ride and train took me back to Sea-Tac Airport and soon I had joined up with my new co-workers, a Minneapolis-based crew that I was joined for part of a trip. Seattle to Calgary, Calgary to Salt Lake City and finally Salt Lake City to Nashville made for a pretty busy first day. By the time we arrived at our hotel in Nashville, I was exhausted.

But flight attendants are sort of bad at sitting still.

Soon I was chatting with another crew in the hotel shuttle van and before we knew it, all of us had joined forces and were planning out our night. A quick taxi ride downtown and we were in the middle of a warm Spring night in the Country Music Capitol. Twangy guitars and crooning singers sounded from every bar and cold beers were cheap and plentiful. I forgot about my twelve-hour duty day and took in my surroundings.

I met up with an old roommate of mine and before we knew it, we were singing karaoke and closing down the bar. I caught a cab back to my hotel and collapsed, before remembering that I had promised to meet up with my crew early in the morning for sight-seeing.

One of the best things about this job is the long layover. Sometimes, the scheduling gods are pleased and you are gifted with a 36-hour layover in a city like Nashville, Colorado Springs or Austin, Texas. An entire day off work, in which you are paid!

My crew and I rented a cheap car and hit up the local micro breweries. Blackstone Pub, Flying Saucer and Yazoo Brewery were toured, tasted and thoroughly enjoyed, and soon enough it was time for us to head back to the hotel for some rest.

Saturday morning the crew returned to Minneapolis, where I made yet another goodbye to a great crew. This job is full of goodbyes, but luckily enough, I know I'll run into these fine folks in some airport along the way. The airline industry is surprisingly small...

...as I was soon reminded of. I walked over to a nearby gate, getting ready to jumpseat on a flight from Minneapolis to Spokane, hoping to eventually get to Seattle. Sitting a few seats away was a familiar face: Mitch, a MSP gate agent whom I had met at an airline interview in Phoenix! We were soon chatting and catching up, both of us aiming to jumpseat our way to Seattle.

Arriving in Spokane, Mitch and I found an airport pretty much stuck at a standstill. Cancelled flights, mechanical issues and weather had caused a back-up of flights to Seattle. We were stuck. We struck up a conversation with a friendly pilot named Ben, and before long, our airline instincts kicked in.

We decided to rent a car and road trip across Washington.

The next four hours were filled with good music, swapping stories and laughing about our crazy lives. I dropped Ben off at Sea-Tac Airport, took Mitch to his friend's house and took myself home.

Today was Sunday morning. I woke up and got ready, putting on my uniform and wondering what the next week would bring. I arrived at the airport and ran into a few Seattle-based crew members and we chatted, laughing about past layover stories and inside jokes.

And then I realized something. I really, truly love this job. And I love the company I work for, I really do. It's not a big company, but not small either. It's feels like a family, and I wonder how I ever got so lucky.

Sometimes I think that I need to go bigger, make more money, fly more exciting routes. But maybe, right now, I'm exactly where I need to be. 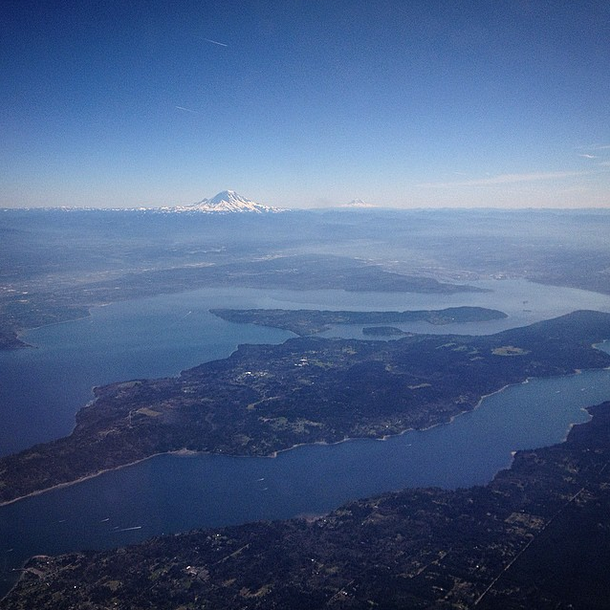