Everything happens for a reason. Every little conversation, every smile, every little detail around you is there for a purpose. It might not all make sense yet, but don't worry; it will soon.

I went in to work today, tired from a night out with a good friend. Our annual Christmas tradition is to sing Karaoke at our favorite bar, and we did just that. I finally collapsed into bed around late o' clock, and woke up a little groggy. But totally worth it.

At work I was oddly sensitive to everything. Noises, off passengers, weird smells... everything set me off. I felt like I was on edge, ready to pounce, and I didn't know why.

It was a long day. Seattle to Long Beach, California. Long Beach back to Seattle and then Seattle all the way up to Edmonton, Alberta. People were grumpy, I felt tense and in my jumpseat, I felt as though I was counting down to something.

On the final descent from Long Beach landing into Seattle, something happened. I had just made an announcement in preparation for landing. The lights were down low, people were snoozing. And then one of the passenger call buttons went off.

I heard someone yelling, and then things just sort of went into slow motion. The other flight attendant was rushing towards me, telling me that an older woman was unresponsive. She needed oxygen. I whipped around towards the compartment and yanked out the portable oxygen bottle, glancing at the numbers that reassured me of its usefulness. I slung the oxygen bottle strap around my body (motions carefully practiced in training but never used, until now) and ran down the aisle. I plopped down in row two and saw that the old woman had regained consciousness, but her face was grey. Holding her wrist I explained that I was going to give her oxygen, and that we would be landing shortly. Her eyes were frightened and I tried to disguise my own fear. I turned the nozzle on the life-giving air and held the mask to her face.

Suddenly we were landing, and I was running down the aisle, checking on the others, taking my own seat, reviewing emergency procedures in my head even while a real situation played out in front of me. Medical personnel were coming onto the aircraft, taking the woman away. A voice, maybe my own, calmly instructing passengers to remain seated, stay calm, while the EMTs carried the woman away. The other passengers clapping. Me digging in my pockets and realizing that I had at some point during the crisis written down tiny, minute details on a scrap of paper. The psi of the oxygen bottle at 8:29pm. The passenger's name and address. Her medical history. The events as they played out. I didn't even know that I had done that.

And then it was over, and we switched out our emergency equipment and boarded the plane again. I walked through my duties as if in a dream, oddly aware of every detail. Stow those bags, please. Put your tray table up. Airplane mode, everyone.

Soon we were back in the air, smoothly sailing through the inky black night. The lights were dim and I was standing in the galley. And then I heard a noise tear through the silence. A call from the flight deck. I answered the phone, afraid of what emergency might await.

"Come up to the flight deck, quick!"

We blocked the aisle with the cart, turned off the galley lights and made the switch. As I stepped into the tiny dark cockpit my heart was racing. What was wrong now?

And then my eyes adjusted, and I realized the captain was pointing out towards the sky. And then I saw it. Beautiful dancing green shadows on the horizon. The Northern Lights, as seen from 39,000 feet over northern Alberta. Slowly, the strain of pale light swam closer, then shimmied away. Up and down. Fluid. Mythical. Spectacular.

Later, in my jumpseat, I looked down the darkened aisle of the plane, senses still on high alert. As we were about to land, that I reached up and touched my cheek. I had been so preoccupied with monitoring my cabin that I had failed to realize that tears were streaming down my face.

I smiled. Everyone was safe, healthy and ready to land. My job was over, for now.

Just breathe, friends. Everything is going to be alright. 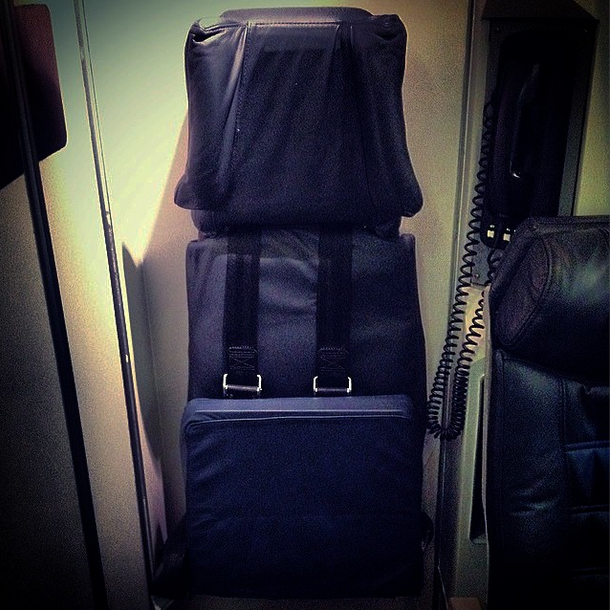