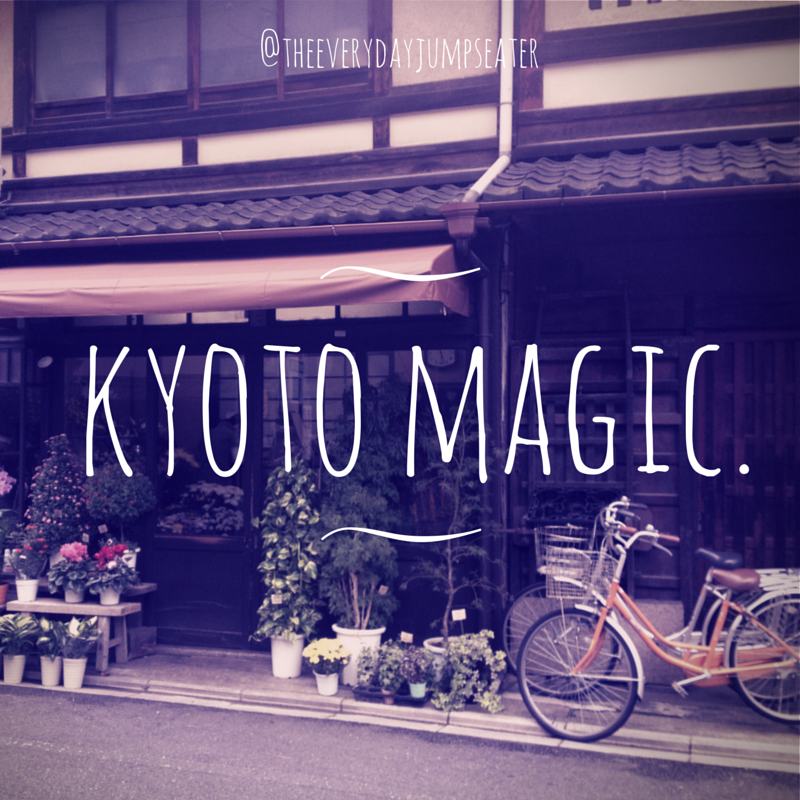 October 2013. Before I was a flight attendant.

Everything just seemed like magic. The plane ride, from Seattle to Osaka was long, but nowhere near uncomfortable. Even in our lowly coach seats, we were brought newspapers and free drinks (we tried one of each of the Japanese beers, sipping the Asahi and Sapporo and Kirin like fine wines), and were awoken every few hours for meals and snacks. I had downloaded a Japanese language app prior to this trip, and was excitedly whispering phrases to myself over and over.

When we landed at the Kansai Airport, it was late afternoon. In a haze, we boarded a lovely little train from Osaka to Kyoto (I still don't know how we did it), and marveled at the clean, quiet train that whisked us out of the big city to a slightly less big city.

Our faces pressed against the glass, we were in a blissful state of shock. We had no idea what Japan would be like. We had dreamt up this traveling scheme just months before, in order to visit a good friend who had just moved to Kyoto. Busy with work and moving and life, we had little time to prepare for the trip, besides grabbing a second-hand Lonely Planet guide from the discount bin at Half Price Books a few days before departure.

And now we were here, and everything was more wonderful than we ever could have imagined.

Arriving at Kyoto Station, dusk was just setting in. As we exited the station, a fine mist began, making us feel right at home, 5,000 miles away from rainy Seattle.

We only had to walk four blocks to our hotel. Inside, a Japanese guy in his early twenties checked us in, and showed us around. He apologized twice for his English, which to me, seemed perfect. He handed us a map, marked with his favorite shops and restaurants. Our room was tiny but perfect, built in the "modern Ryokan Capsule hotel style."

We got a hold of our friend, who promised to meet us in the hotel lobby. A few minutes later, after hugs and "I-can't-believe-we're-meeting-up-for-dinner-on-the-other-side-of-the-world," we headed back out into the misty night.

There is nothing like an rainy autumn evening in Kyoto, wandering through back streets and dim little alleys. The sounds: raindrops hitting roof tiles, the distant beeps of taxis with their white-gloved drivers and, of course, bicycles. Everyone rides bikes here, those big cruisers with baskets and a bell, and the little tinkling sound of a friendly bell is the best sound in the world.

To me, Kyoto has a fragrance, a distinct aroma. It is cherry blossom and warm pastries, steamy ramen and gyoza and just a little bit of earth. The smells reach your nose after a long journey, from the ancient mossy shrines and temples to the steely bullet trains and buses, and finally, you smell it: a story.

As I took this all in, we finally reached our destination, a little ramen shop. We bought tickets and sat down at the counter while the chef prepared our dishes. I was almost too excited to eat when the food finally arrived, but eventually, the 16-hour-long journey hit me and I dove into my bowl of noodles and felt like I had never tasted anything better in my life.

That night, I sat curled up next to my window in the hotel and stared outside at the rain and inhaled and listened and dreamt of magic.

Someday I plan on publishing a book of my globetrotting adventures, all the way from the jungles of Bolivia to the electric streets of Seoul and everything in between. For now, I'll be posting snippets, to instill a little wanderlust in all of you.